Ok, well…I’m a bit behind on putting this post up, but seriously it was difficult to find much info on the this place. What I did find though was interesting to say the least. It definitely means another trip back over there to check out the area again. When Cathy mentioned in a comment about how this place just had to be haunted, she must have been reading my mind. I had already started the process of researching and came across some great info.

Central Louisiana State Hospital is a hospital for the mentally disturbed. It opened in the early 1900`s and several original buildings remain standing and in use. At its peak in 1959, the hospital housed 3,128 patients, but it now houses only 132 patients. The hospital grounds include a cemetery with 2,356 graves. The Civil War-era Fort Randolph is also on the grounds.

There has been definitely some paranormal activity noticed around the grounds. Unit 2 has an elevator that operates by itself during the night. Also doors are heard slamming during the night and when investigated all doors remain locked as they are usually kept. Unit 7 when reoccupied in 1999 experienced several sightings and unusual events. Strange glowing lights passing under doors, objects from shelves falling off randomly, clocks keeping random inaccurate time, chairs were flipped over and electrical appliances would come on and go off by themselves, voices were heard in unoccupied offices. A mist was seen and witnessed as well.

There was an investigation done by paranormal researchers (laspirits.com) on Rose Cottage, which is on the grounds as well. Rose Cottage was designed in 1917 by Joseph H. Carlin of Rayne, a patient at the hospital from Sept. 13, 1909, to Aug. 1, 1912. He also served as architect of Rose Cottage as well as “builder” of the hospital’s dairy barn in 1923. 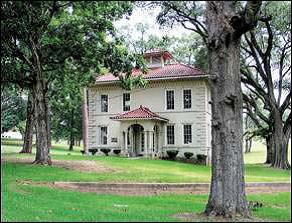 My recent 2011 shot of the Dairy Barn

The Rose Cottage building housed the hospital laboratory and morgue. It served as the hub of the institution’s diagnostic procedures as well as a center of learning and teaching as post-mortem examinations were required for research and teaching.

Autopsies were performed in the pathology building’s first floor, while the lab upstairs was where “histological and microscopic preparations” were done. In later years, the building was used for occupational therapy.

During their investigation while downstairs in the room where electroshock therapy was given, they heard a sudden extremely loud crash. They described it like a piece of pottery falling from a shelf. When they went to the source of the noise, they noticed an actual portion of the floor tile had literally shattered into several pieces. With pieces that splintered off were and scattered around almost as if the tile had exploded.

So, needless to say a creepy place. I’m not sure how much exploring they let you do around there but it’s worth checking out some more first hand. I drove through there a few years ago before I really knew much about it, but always wanted to go back and explore more this just amps up the interest LOL!

Little adventures in the outdoors